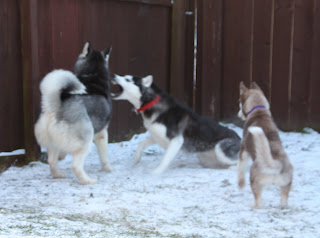 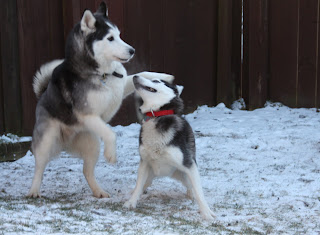 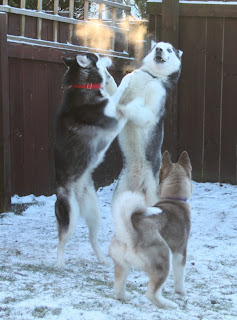 Well Stormy has now been here just over a week. He is starting to settle in nicely now (well I think he is kinda slowly learning that I am boss).

He suffers badly with separation anxiety and is quite nervous due to being abused and moved around a lot. He howled a lot in the kennel last week when mum and dad were at work. One of our neighbours came and upset mum and dad pretty much saying he would have to go because she and the other neighbours refused to put up with the noise. Dad told her he was new and needed to be given time to settle. He also spoke to the other neighbours who said it was not a problem to them as long as mum and dad were helping deal with it so that it isn't a permanent thing.

Me and Stormy had a few fights when he tried to be top dog above me and when he didn't take my tellings or stole my place next to mum and dad. He is slowly getting the hang of how things work around here.

Mum took him to the groomers at the weekend as he still smelled a bit, poor boy was nervous and just peed himself the whole time. She also spent weekend feeding him and playing with him in our kennel to try and make him feel happy there.

This week has been a lot better he is not crying as much and we are getting on better. I am in season so am teasing him a lot and mum thinks that might have a lot to do with his crying! We have played together a lot this week so Talia is jealous (she doesn't understand I need a boy at the moment). Last night the angry neighbour shouted at dad again. She admitted that the noise was less this week but said she wasn't putting up with it and Stormy had to go! Mum and dad are furious especially as she even admitted that the noise was improving. Mum spoke to some other neighbours who said it was better and just to ignore the other lady. Wat upsets mum is this lady has 4 rescue dogs so should understand that Stormy will take a little time to adjust.

Anyway enjoy pics of us playing and it is race time again this weekend woo hoooo.
Posted by Britny at 13:02