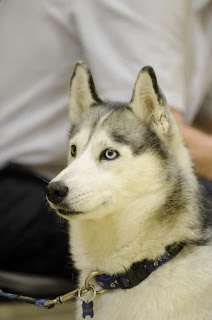 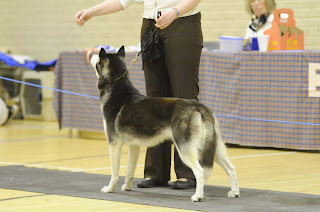 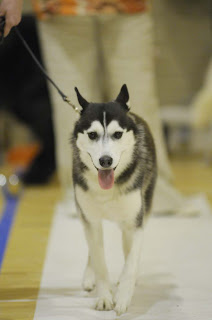 Another good day for Kayla 1st in Post Grad bitch, best of breed and third in the working group. Was a very hot day not ideal for Kayla who was a bit grumpy and not at her best. Huskies really suffer in the heat.

A few positives and negatives met some lovely new people, also found some ignorant they didn't move their dogs from Kayla when they tried to play or when they were bothering Kayla who being very dominant can be very grumpy when dogs repeatedly invade her space. I guess I need to learn to be more assertive with people and ask them to move their dogs away but I don't like causing offense to people. I also had one lady who really really upset me. Due to space constraints I had to crate Kayla along with my other dog Skye until some of the classes finished and people left freeing up space to put up my second crate. Skye has had a very bad life, I am her 3rd owner and as a baby she was savaged and almost killed by a Japanese Akita. As a result of this she is nervous around dogs and Kayla being the way she is can be a bit much for her at times. They had a little disagreement in the crate which I sorted quickly with a squoosh of water and a telling off and they soon settled. However one lady decided to come up to me and tell me that due to new Kennel Club rules since the BBC tv programme I could find myself reported for having having dangerous dogs and removed from the show! I looked at her in disbelief and said they had a minor disagreement they are settled now and huskies are generally rough with each other anyway! She said didn't matter people could have found their actions (20 seconds of growelling) upsetting and that would be it I would be done for having dangerous dogs! I have never heard such rubbish in my life. I did read the kennel club rules when I got home and presume she was referring to the following

It simply is not acceptable that a dog displays aggression in competition. If your dog growls, or otherwise shows aggression, the judge will immediately exclude the dog from the ring, and from further competition. It is of paramount importance that your dog has an entirely stable temperament when attending any canine event.

Now can anyone introduce me to a dog that has never taken a dislike to another or been a bit grumpy? Kayla has always behaved well at previous shows but I find it worrying that having a grump with her sister could cause her to be thrown out of a show and a lot of huskies have varying growls that are them chatting. Skye makes lots of talkative growls you can have entire conversations with her, she only ever howls or grumbles away to you she never barks. I also find it annoying that other people's ignorance in letting their dogs continually annoy a dog rather than allowing the dog its space could lead to this rule perhaps being used. To be honest I saw many dogs on the day grumble at other dogs they met and I see that as entirely normal and not a display of agression!

To be honest I am becoming more and more upset at the ignorance displayed against huskies. They are very different from other breeds theier posture is very dominant they tend to greet other dogs chest puffed out head and tail proudly upwards. They are very vocal and playful along with this. People often misinterpret this as viciousness. Now Kayla is very dominant as Skye is a weak dog so she has never been put in her place by her and most dogs we meet unless they are fairly submissive result in Kayla trying to be boss. Unfortunately most times other owners run off with their dogs immediately and never let us work through it (of course Kayla always thinks she has won when the other dog is hurried off and it just makes her more exciteable when meeting the next dog) Generally with a telling off and reintroduction of the other dog Kayla generally just ends up playing happily! Thankfully I chatted to another husky breeder at the show who assured me that Kayla was just expressing her dominance and once she meets a dog that knocks her on her ass and gives her a telling and she will calm down. In the meantime I work hard on her manners and read her body language so that if I can see she is going to meet inappropriately I will keep her out of the way of the other dog. I just wish other people would prevent their dogs invading Kayla's space and have the courtesy to not allow their dog to continually wind mine up!
This has made me seriously wonder whether to stick to champ shows and large open shows where there is more space and seemingly more experienced dog owners, where we have not encountered this before.
Posted by Britny at 04:00 7 comments: 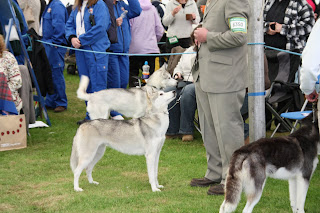 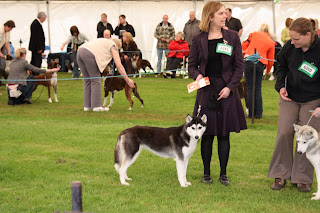 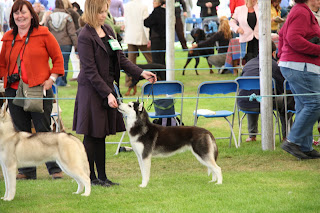 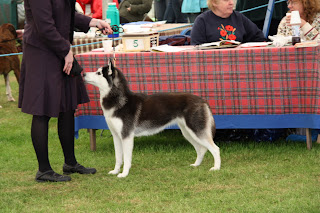 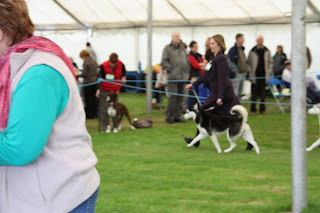 Well what a weekend. It was off to the groomers on Saturday and Kayla came home looking stunning, however her and Skye were grumbley all night. Eventually it erupted into full scale war and Kayla was left with bleeding scabby paws that she would not let me clean up :-( As if that was not enough dad decided to drop the sauce for our dinner over her, I began to think the show would be cursed.

We arrived at SKC at 8.30 am (in somewhat of a coma after being up at 3am) and bumped straight into our breeder. We got to meet her wee sister Falon who was recently returned to the breeder by her owners who had obviously not been truly prepared for a husky. She is a pretty wee thing but so different from Kayla.

It was a long wait for the junior bitch class as judging was slow. We decided that as it was a husky breeder judge and a large class of 12 for us that even being placed would be fantastic! Kayla really hasn't been herself this week, she has been really subdued and whiny. On the first runs around the ring she was great and she behaved nicely while the judge went over her (bit worried as the vet had his hand up her ass earlier in the week so was not sure if she would be skittish). Then came our triangle which she did lovely but then came the twice up and down and she just did not want to trot and nooby show mum did not know what to do other than drag her. At that point I thought that's it we will be binned (she gave us another chance to trot and again Kayla was not having it).

In what for me was a shock Kayla got the first place :-) When we got back to our breeder and other people we know I got helpful advice for Kayla behaving like that in the future, breeder said I didn't have to run her in the same place, if she didn't like that spot just move her a few feet over and more often than not that does the trick. Another lady said it may have been that as we had boxers in the ring next to us and they throw their treats that it may have been stray treats distracting her (that actually may fit because I think she did pick something up just before the trot and now I think of it was gagging a bit).

For me it was great to be get that win under a breed specialist and as apparently she generally likes racy types we know that she should fair ok under them and her last win was under an allrounder so we know know she it pretty enough although athletic build to win them over.
Her breeder is over the moon with her and has asked how we might feel about them taking her for a week or two after our next champ show and they will take her to Richmond and maybe some others that are too far for us to try and get her some more placings. I think that would be great for her as their dogs stand beautifully so they can iron some of the kinks out for me and will do her good to be shown by someone less nervous and inexperienced :-)
I will post piccies tonight as still have them all to sort through :-)
Posted by Britny at 23:52 3 comments: