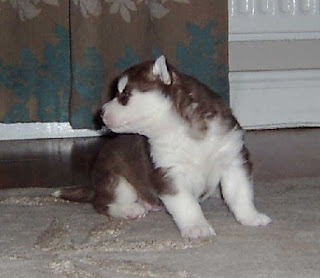 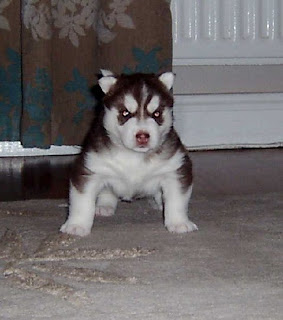 These are the latest pictures from our breeder. Doesn't Talia look scary like a big fat bulldog heheheheh.

Apparently it was her first time in the living room and she just froze in such a big space.
Posted by Britny at 12:04 5 comments:

My weekend of good deeds 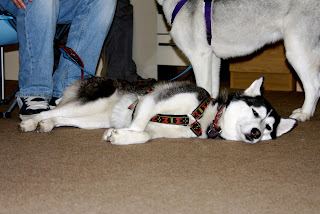 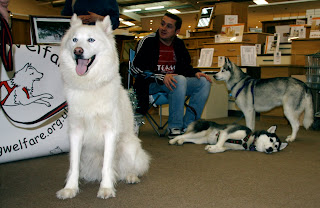 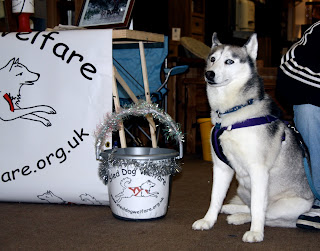 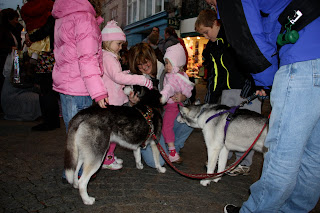 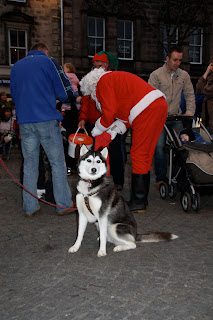 This weekend me and Skye were out doing our bit for sled dogs who are less fortunate than us.

Saturday was the Moray Winter Festival where Santa is out and the Christmas lights get turned on. We spent a cold afternoon giving cuddles and having mum and dad tell people a bit more about us huskies. Got to get into a bit of mischief with my friend "Little Skye" too hehehehe.

Sunday was another hug a husky day in Decora DIY store. We did the morning shift with our friend Marley or the wookie as he is also known). Finally we have found Skye's talent. She is no good for showing or racing but guess what she is really great at fundraising. With her pretty Disney face and different coloured eyes people make a beeline for her (I get a bit jealous of that hurrumph). She is very good at sitting next to the money bucket making cute faces and has very good pleading eyes according to mum.

Mum says she is so proud of how good I am with toddlers, I walk up to them (or just sit if they are a bit scared) wag my tale and smile then give them a sweet husky kiss.
Posted by Britny at 11:35 4 comments:

Back to cute pictures of me 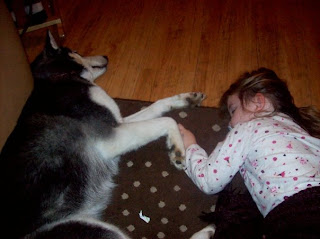 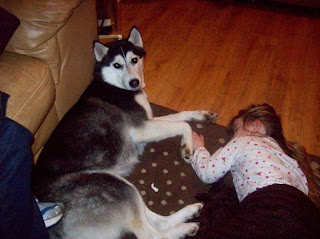 I mentioned in my blog about my last shows that I made a new best friend. Mum finally got the pictures of me and wee Emma lying together on the floor.
Posted by Britny at 14:40 6 comments: 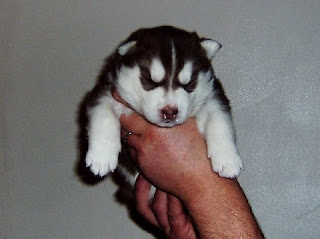 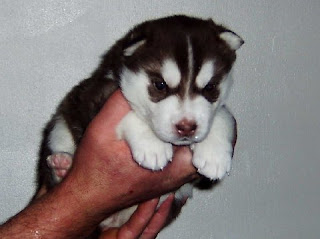 Sigh mum wants to show you my new sister's latest pics grrrrr. My sister has a aname apparently mum and dad decided on Talia.
Posted by Britny at 14:30 3 comments: 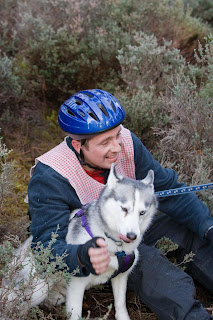 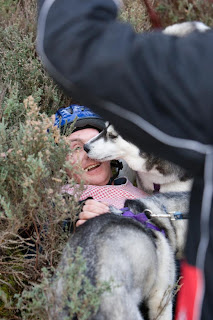 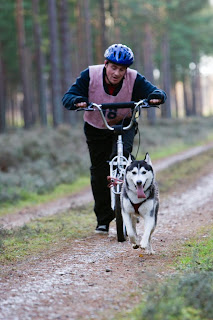 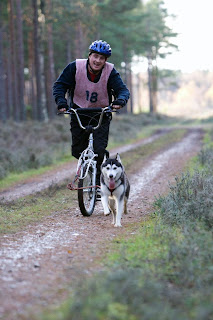 This weekend saw our first rally as competitors. Me and dad entered the one dog scooter class. We had only been training for distances of a mile and a half as mum had been told that was the usual scooter distance. Much to our shock it was decided to use the same 3.6 mile trail as the bigger dog teams were running.

On Saturday me and dad took 3rd place behind huskies who had rather fitter mushers who are more used to running than poor Dad, they finished only 3 minutes behind the leader and Dad said he had held me back a bit worrying that maybe the distance was too long for me.

Sunday Mum and Dad considered maybe not running me for the second day as I had already been run harder than I had been used to. Mum and Dad decided to see how I was at the start line and if I didn't seem keen we would scratch her from the race. They need not have worried as I was screaming with excitement and me and Dad managed to finish second on a trail which was wetter and harder work on the second day. We finished only a minute or so after the winner which was a fantastic achievement.

Mum and Dad are so proud of me and say for a little dog I have such a big heart and such determination and we are all very excited for our next rally at the end of November.

Mum says as racing people think my breeders breed dog's who are not good runners that a lot of people were surprised at how good Iwas. Oh and mum survived camping in the caravan with no electricity, hairdryer or hair straighteners hahahaha. Mum is high maintenance and does not like roughing it heheh.

The photos were take by George Michie http://www.georgemichie.co.uk and we have also changed our website address to http://kohoutek.weebly.com/

Kohoutek is our chosen kennel name which has been provisionally approved by the Kennel Club.
Posted by Britny at 13:55 7 comments:

More pics of my baby sister 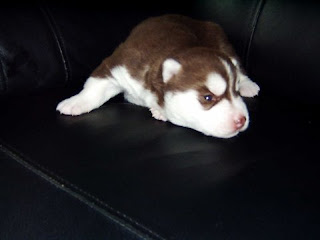 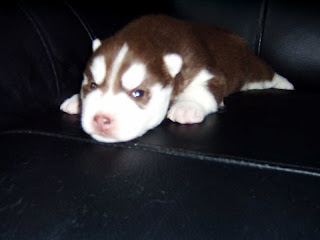 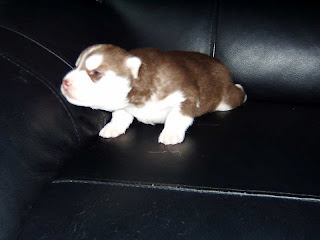 Apparently my little sis has opened her eyes so my breeder sent mum more pictures today.
Posted by Britny at 07:01 4 comments:

My weekend of showing and new friends 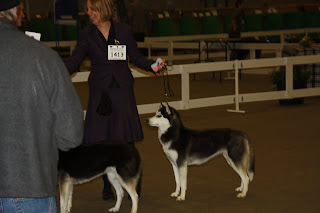 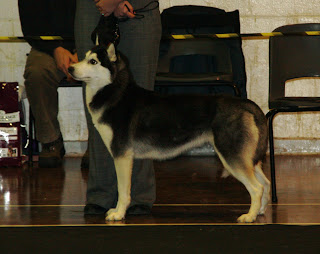 Well was a busy weekend for us. Friday I was at the groomers to make me even more beautiful and then we had a few hours journey to stay with some fellow husky friends of mum's. There were 2 very very naughty husky boys there they kept erm er trying to hump me. It was quite hard work fending them off when both were trying it at same time! They also have a cat um yum yum so the weekend involved lots of hiding the cat from me (and mum wonders why I wouldn't eat my kibble dinner harrumph)

To keep the peace after a while they were shut outside and I stayed in the living room with the humans. Apparently they all thought I was such a lovely quiet girl (they really don't know me hahahaha). I am not used to spending lots of time with young children but the children there were very well behaved and respectful to me. I got lots and lots of cuddles especially from the little girl Emma (she says she loves me). While everyone was chatting and me sleeping there was a big bang that scared everyone. The humans thought it wasa firework coming through the window but it turned out to be a baloon hahahahha. The children then got out the remaining balloons for me to play with. I entertained them padding it till it flew up in the air and bounced it like a basketball ( I am so clever) then I chased the children round the living room to get the balloon back. Sadly after a while my paw was a bit heavy on them and I burst it. Was a shame as we all were having so much fun and the children were so happy as there boys won't play with balls and things.

Saturday was the Scottish Husky Club Open Show. It isn't one of my favourites as it is in a small hall and very noisy when other dogs are howling and I am trying to sleep. As mum has whiplash she had to ask the judge if she could stand me and if my breeder could do all our running in the ring as if I pulled on the lead it would hurt mum's arm. Luckily the judge was a nice lady and said this was fine. Well it got complicated as my breeder was in the ring with his boy in a class. The judge split our class into 2 and ran the first dogs, then someone held my breeder's dog while he ran with me, then he went back to his dog. Eventually it came to my turn for the judge to go over me and run me alone so she said for all dogs to relax while we waited for my breeder. We had to wait ages and I fell asleep and mum was just so embarrassed at holding up the class so long. eventually I got a 4th place and mum was pleased especially as we had caused so much trouble hehehe. My new husky friends and our breeder all did well too so it was a good day for everyone.

Sunday was the Working and Pastoral Breeds of Scotland Association of Scotland Championship show. This one was a really really long day. Again mum had to ask the judge if she could stand me and my breeder run me. Again the judge kindly said yes. the judge was very nice, at the moment I get very bored at shows when I just have to stand and I wouldn't look at her so she fed me some treats :-) I love the trotting and showing off bit although I kept looking for mum and wondering why she wasn't running me. Eventually after the judge deliberated a lot and asked the ages of me and another bitch she got first and I got second. Mum was very proud and pleased and the judge said the only shame was that I didn't have an interested expression (mum says she needs to find something other than food to take in the ring as I just stare at her hand and don't look interested in the judge or in being there). Our breeder got best bitch and my new husky friends also did well too.

Mum thinks it was a good weekend and that it was so much more fun staying with people rathern than a hotel and I miss my new friend Emma. She rang her mum at the show to see if I was coming back to their house. Mum is waiting for her mum to send a picture she took of us sleeping on the floor together.
Posted by Britny at 07:26 4 comments: 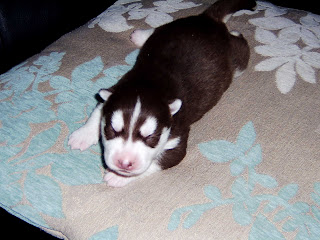 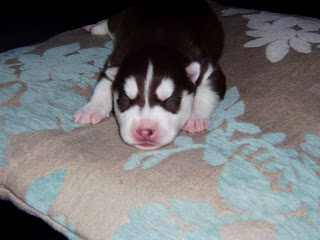 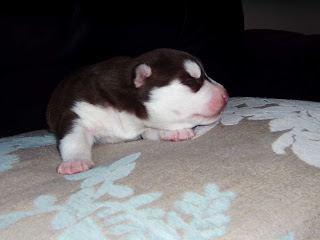 Sorry again not had time to come visit all my friends blogs. Mum had a vomiting virus and then this weekend a car crash so life here has been hectic.

Anyway today mum got something that cheered her up, yes pictures of my new baby sister, woo hoo another dog for me to be in charge of.

Mum says isn't she just the most adorable thing you ever saw? (in my opinion certainly not that would be me of course pff)
Posted by Britny at 07:10 7 comments: