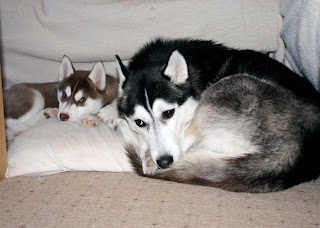 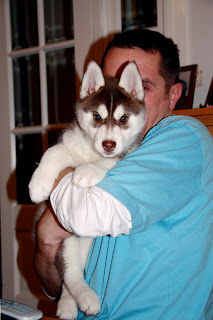 Well we are onto week 3 of the "big freeze" in Britain. It is causing chaos here Britain is coming to a standstill lol. The humans are all acting like the world is ending, panic buying, schools and local facilities closed you would think Armageddon was upon us lol.

The north of Scotland has had snow lying the full 3 weeks and it is causing problems here. Dad had mums little car this morning as we were all going to the vets today. Well he had a little bump on way to work so had to come back (luckily only damage to a wheel and burst tyre or mum would have given him a right telling off hehehe). At least it meant we could have a family trip to the vets hehehehe.

Talia was there for her 2nd vaccination and to get microchipped. She was a good girl just like me as a baby she thought the vet was a new friend rather than someone to fear. She didn't even squeak at her injection or the big microchip needle. Vet thought she was lovely (she forgot to say not as lovely as me hmpff) and she got a clean bill of health. Mum also booked me in to get my hips checked next week to see if I am good enough to breed from in the future if she decides that I can ever have pups.

This weekend was meant to be another race and we were all excited as it was going to be on sleds due to the snow (that is a very rare event in Britain). Sadly due to some politics between committee members at that club it has been cancelled at the last minute :-( However a few of mum and dad's friends suggested we all go there for a training session as it is a shame to let a trail that has been nicely prepared go to waste. It is looking very likely that the big famous Aviemore race will be on sleds too so it will be a good practice run as mushers here have very little experience on them.

Last bit of exciting news is that mum has entered me for this years Crufts. Woo hooooooooooo we are all very excited.
Posted by Britny at 13:39